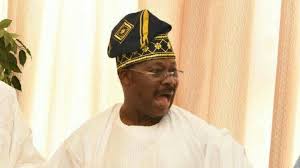 Governor Abiola Ajimobi of Oyo State has congratulated Dr. Kola Balogun of the Peoples Democratic Party who defeated him in the senatorial election.

This was contained in a statement signed by Ajimobi’s Special Adviser on Communication and Strategy, Mr. Bolaji Tunji, in Ibadan on Monday.

The News Agency of Nigeria reports that the INEC Returning Officer, Prof. Wole Akinsola, had declared Balogun winner of the Oyo South Senatorial election having polled 105,720 votes against Ajimobi 92,218 votes.

Ajimobi, who described the loss of the seat as unfortunate, added that no sacrifice was too much for a leader to make.

“The results of the Oyo South Senatorial District election have been released by INEC indicating that I lost to the PDP candidate.

“I hereby accept the result as announced. Although there were a number of grievous infractions and established electoral malpractices, I have decided to let go in the interest of peace.

“If I lose the ticket and the party was able to gain, then it is nothing to feel sad about. APC has done well but we can always do better,” Ajimobi said.